Clam is a common name for several kinds of bivalve molluscs. The word is often applied only to those that are edible and live as infauna, spending most of their lives halfway buried in the sand of the seafloor or riverbeds.

True clams, in the strict sense, are bivalves with equal shells closed by two adductor muscles situated at opposite ends of the shell, and with a powerful, muscular, burrowing foot.

Clams characteristically lie buried from just beneath the surface to depths of about 0.6 metre (2 feet).

Is clam A fish?

Despite the name, shellfish are not fish. Most shellfish are low on the food chain and eat a diet composed primarily of phytoplankton and zooplankton.
hat is the characteristics of giant clam?

What is the habitat of a clam?

Habitat. Clams and mussels can be found in almost all types of freshwater habitats, but are very common in large rivers and streams. Most burrow into the soft substrate to varying depths, while some groups live free on the sea floor. 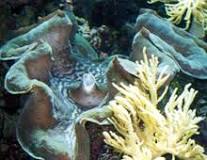 Description: Giant clams (Tridacna gigas) have four or five large, inward, vertical folds in their thick, heavy shell. The shell does not have scutes and consists of two valves. Once they are fully grown they cannot close their shell completely.

What is the structure of a clam?

Clams are marine mollusks with two valves or shells. Like all mollusks, a clam has a mantle which surrounds its soft body. It also has a muscular foot which enables the clam to burrow itself in mud or sand. The soft tissue above the foot is called the visceral mass and contains the clam’s body organs.